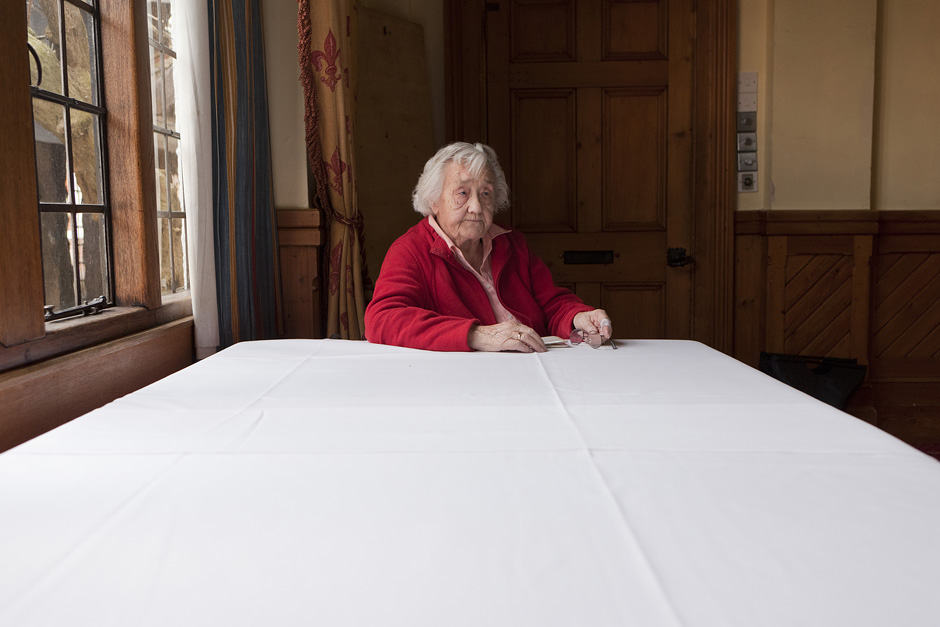 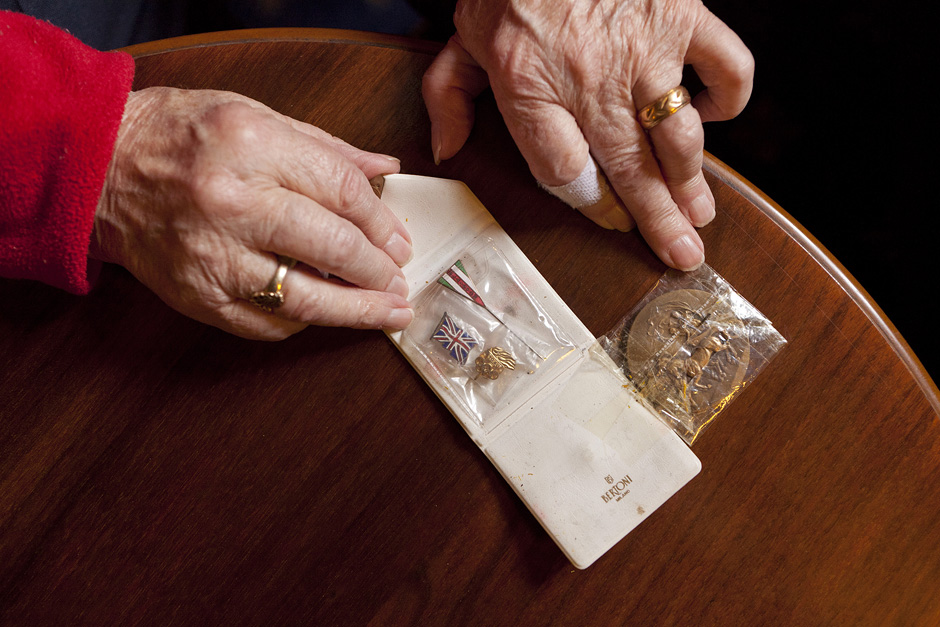 Edna is proud of her medal. © Tadas Kazakevičius 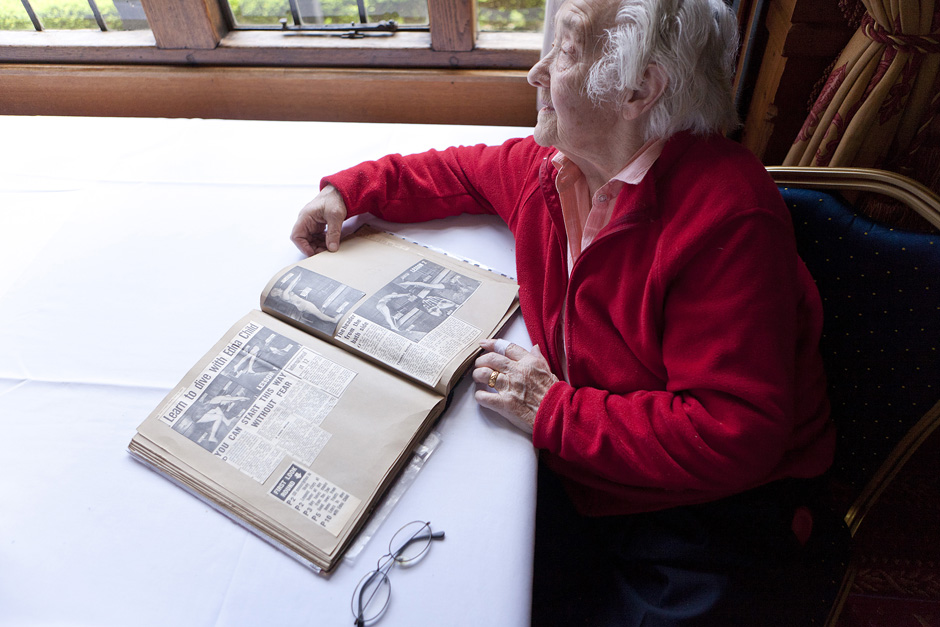 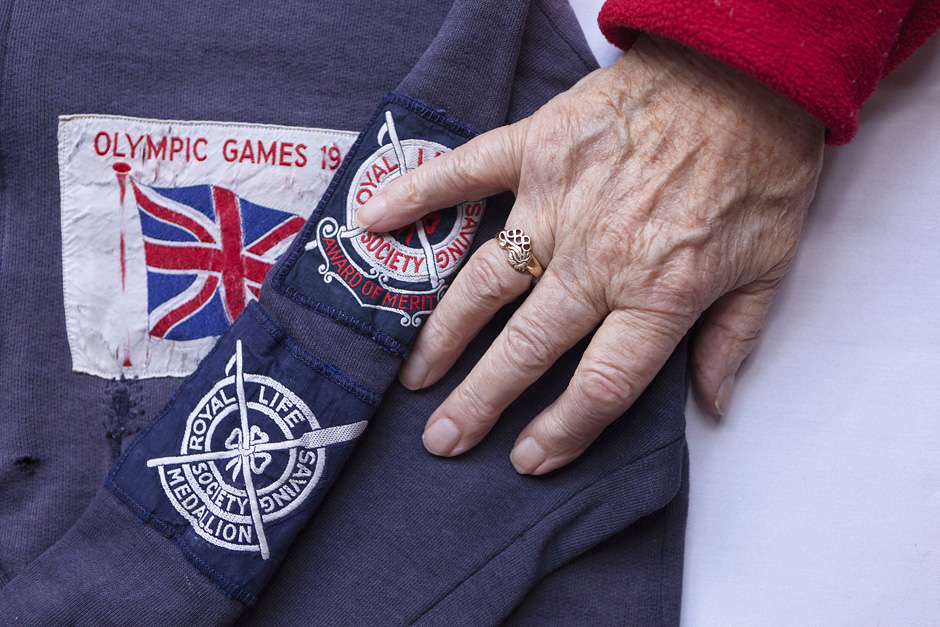 The jacket that Edna got in 1948 London Olympics. © Tadas Kazakevičius 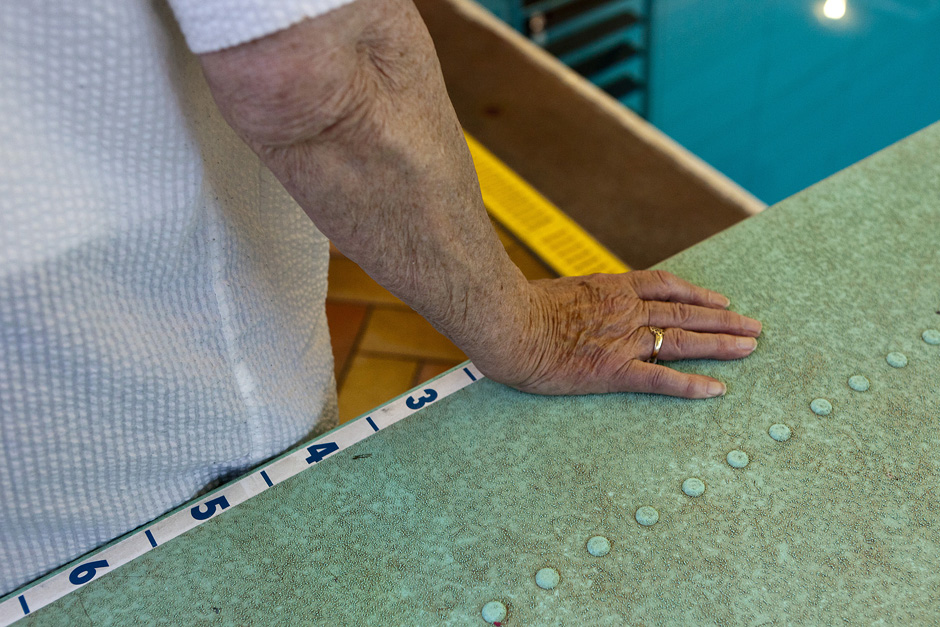 Edna knows everything about the technique of trampoline. © Tadas Kazakevičius 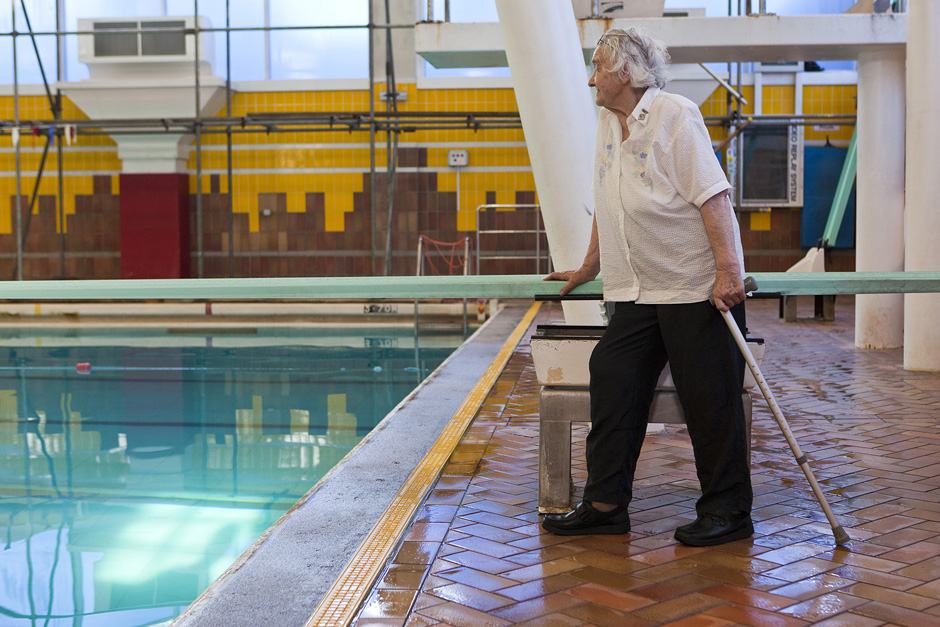 During her visit to the local Hornchurch swimming pool. © Tadas Kazakevičius 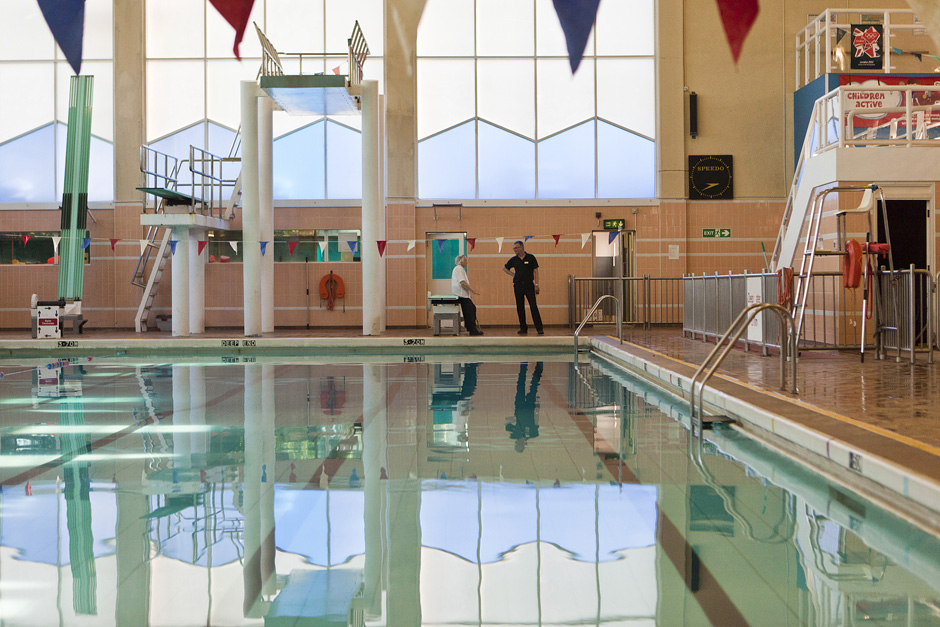 Edna is talking with a shift manager who is a big fan of her. © Tadas Kazakevičius 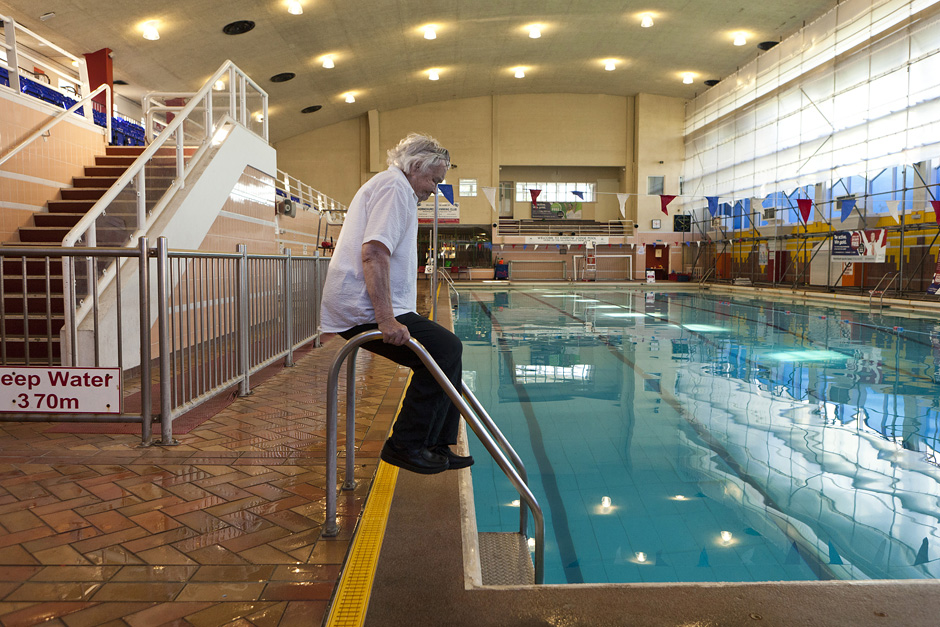 She still has a lot of power in her hands. © Tadas Kazakevičius 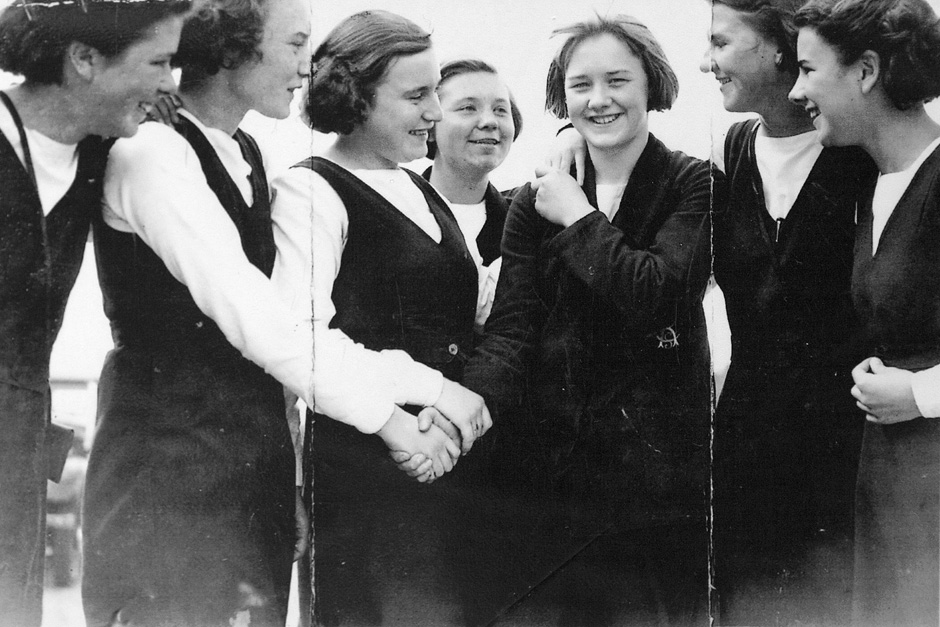 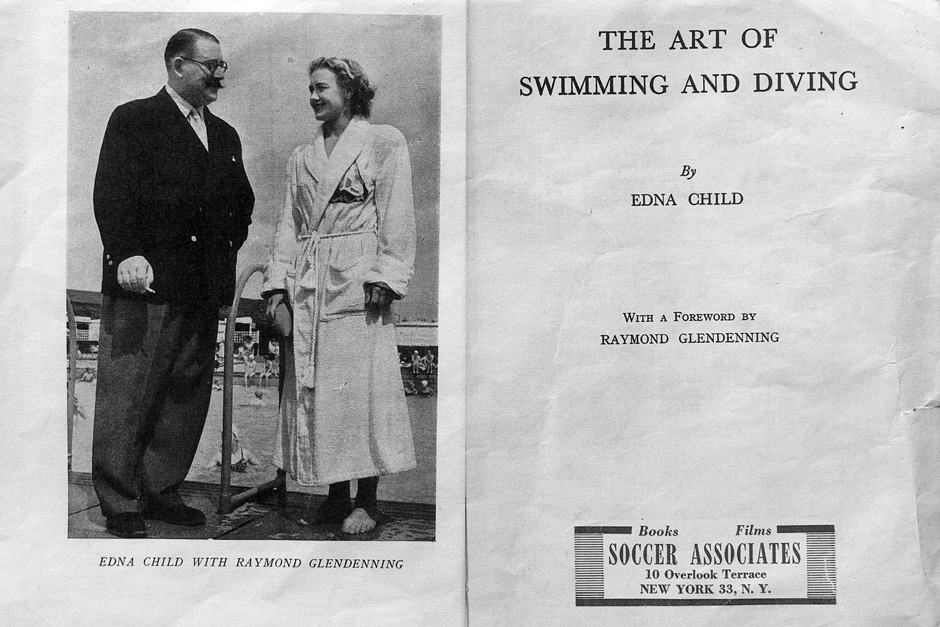 First page of her book on swimming techniques. © Tadas Kazakevičius 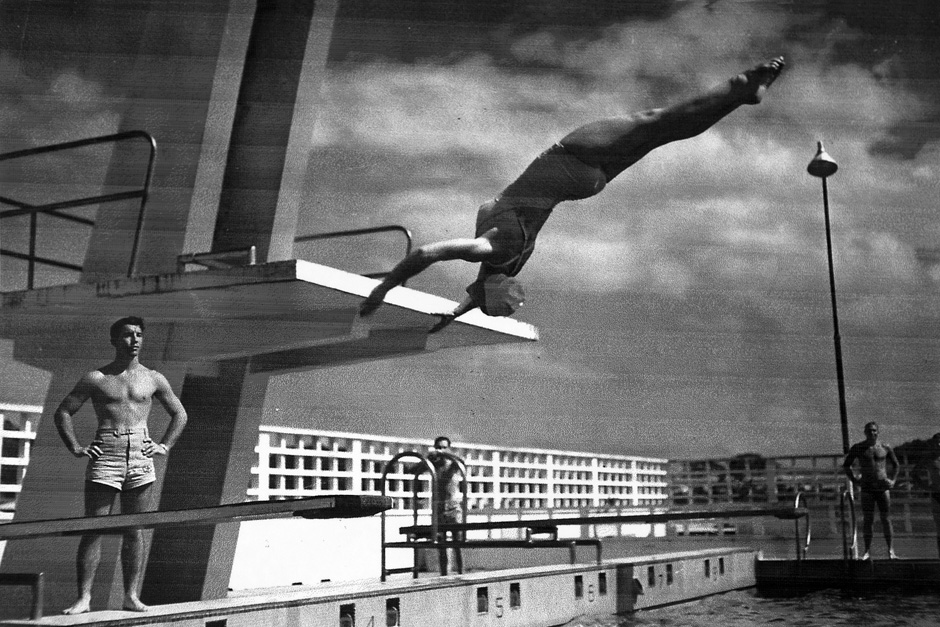 On the trip to New Zealand Edna is enjoying the swimming pool. © Tadas Kazakevičius 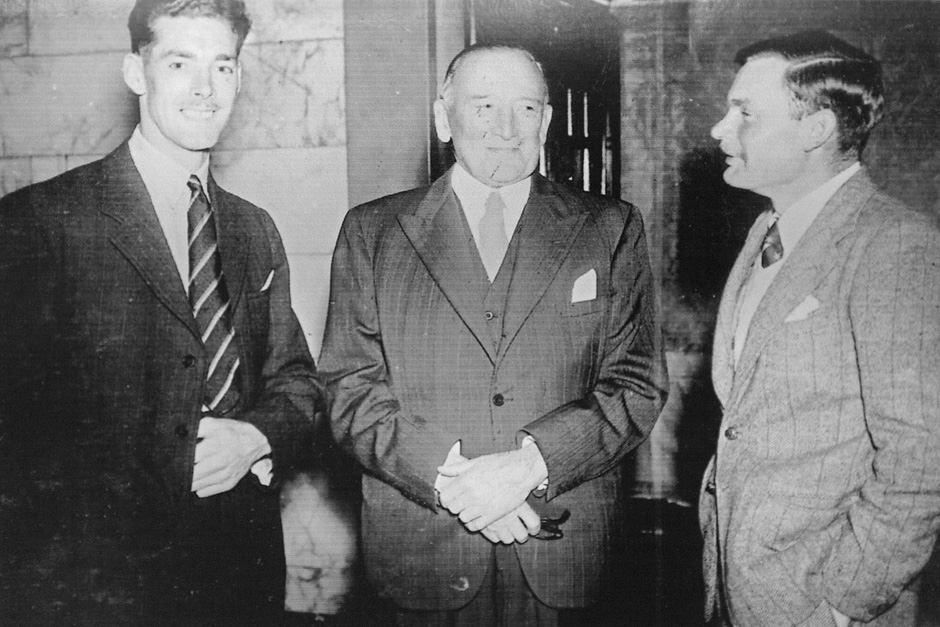 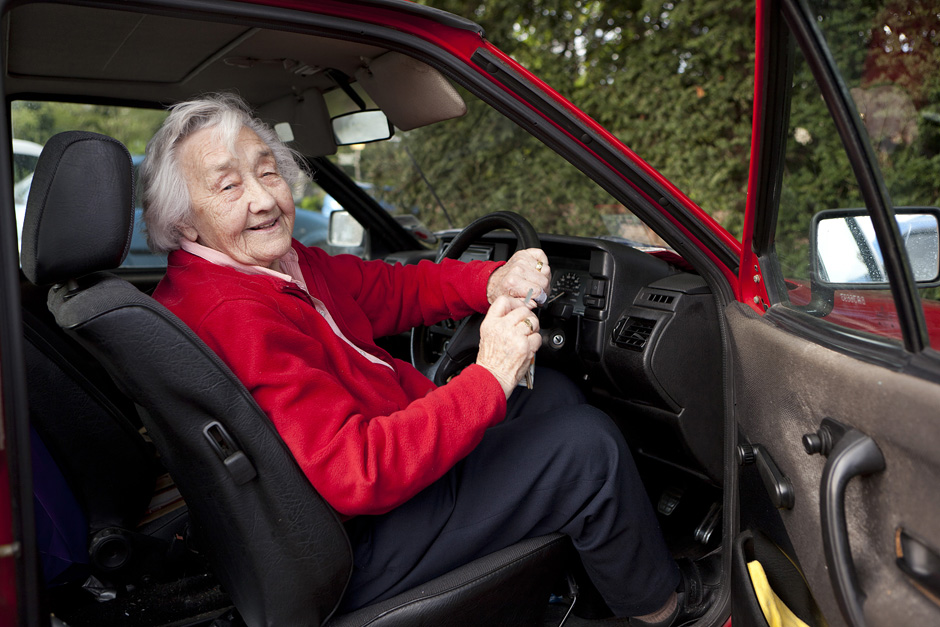 Edna Lilian Child Tinegate was born in 1922 in Westham, London. Growing a bit differently from other kids at that day she was not even hoping that one day she will represent United Kingdom as a diver in Olympic games that happened more than 50 years ago in 1948 in London.

Missus Edna started to swim in her early childhood. Though it started not from a great passion but from a need to have exercises after she got Emphysema, not a very well known sickness at that day. After cutting a big portion of her lung and shortening some of her ribs she got better but she needed to get some exercises to keep her straight and to fix her breathing.

In gymnastics hall she spent a bit more than 3 years but the council that she was living in was building 2 new swimming pools so she got engaged into the water sports and used her skills that were learnt from the gymnastics.

Her mother was a big help in her learning. She was working in a school at that day so she was arranging extra time in pool for young Edna. Mother could watch on her while she was training other kids in a swimming class.

Edna still remembers how she tried the 3 meters platform for the first time. She fell into the water after she lost her balance sitting on the edge of it. Though she remembers her first 10 meter platform jump very vividly. While climbing through the stairs she stopped and couldn’t move more. Though she pushed herself further and for the first time, jumping from that platform she felt flying. That is exactly why she always came back to water and became so passionate about the diving.

Remembering her water sports club Edna is always very proud. Her club was a long going British Empire champion in water sports from the year 1929 until the year 1935 and just because they were not invited into 1936 Olympics as Edna said – to the uncle with a small moustache.

Edna had participated in other important events multiple times. First important test was when she was 16 years old in 1938 in European Swimming Championship. Moreover, she was already invited to the 1936 Olympic games in Berlin though because of the health issues she couldn’t make it. Lated Edna participated in British Empire games in 1950 where she got the first two places in different categories.

Practice for the Olympics was a long road. Especially she remembers her practice during her duty in Army land unit. While looking after the livestock near Sudbury she found a swimming pool around 5 miles from where she lived and the distance and lack of time kept her away from practice. Though after the unit supervisor found out about Edna she was transferred into the glasshouse department ant during her free time she could make it into the swimming pool that was much closer now. “The War changed a lot of our fates and mixed up everything” added Edna.

Missus Edna remembers the Olympics so vividly even though it passed already 64 years ago. At that day it was happening in Wembley Arena. She was amazed that they built a multiple platform arena with a possibility to use it for the swimming and after reforming it it was perfect for a boxing match.

At that day Edna remembers Olympics being a bit more romantic and even chaotic. Even though she remembers how hard it was to valuate yourself. Qualifications for her was one of the hardest points. Though the community of Olympians was very friendly. They communicated a lot with each other and shared their experiences, though she remembers Soviet block participants that were very nice as well. Sadly they were always followed by agents and every moment they felt they are just a bit too friendly they would interfere.

After the Olympics Edna’s life wasn’t so happy. Her father became ill and she had to take care of him. During that time she was invited to the 1950 British Empire games in Auckland, New Zealand but she wasn’t shire she will make it because of it. In the end her family sorted out the care and she started to practice for the games but sadly injured herself during her jump from 10 meters and stretched her ankle. Edna became very sad about it but very soon she got tickets for the 6 week trip by ship to Auckland and the promise from doctors that they will make her ankle fit. As it was said they made it and she felt perfect while getting out from the boat in New Zealand.

After the British Empire games where she got 2 gold medals her life turned out totally different to what she was expecting. During her journey back her ankle started to hurt and somehow one young gentleman started to take care of her. It was Ken Tinegate – fellow sportsman and a British rower who later became her husband. Even though she wasn’t showing a lot of gratitude for him in the end this romance ended up in a wedding. They together had a wonderful baby girl.

Professionally Edna’s life turned out into teaching other kids as her mother. In the start she became a teacher for one year in local school for young children but after finding out that schools expects her to carry on she was sent to Cambridge Homerton College where she got a proper studies on being teacher.

Now Edna lives alone. She had to outlive her husband and as she said there is no day that se wouldn’t remember him. ” I do not think I could find another person like that” she added.

But even with a sadness about her husband she is one happy woman. You can forget she’s 89 years old when you see her learning new things. She still drives a car and always learns to use computer. Happily Edna shows the photos that she printed herself and put on her album that is made out of the cutouts and articles about her or Ken’s successes in sports. She even wrote a book about the swimming that was released in 1951.