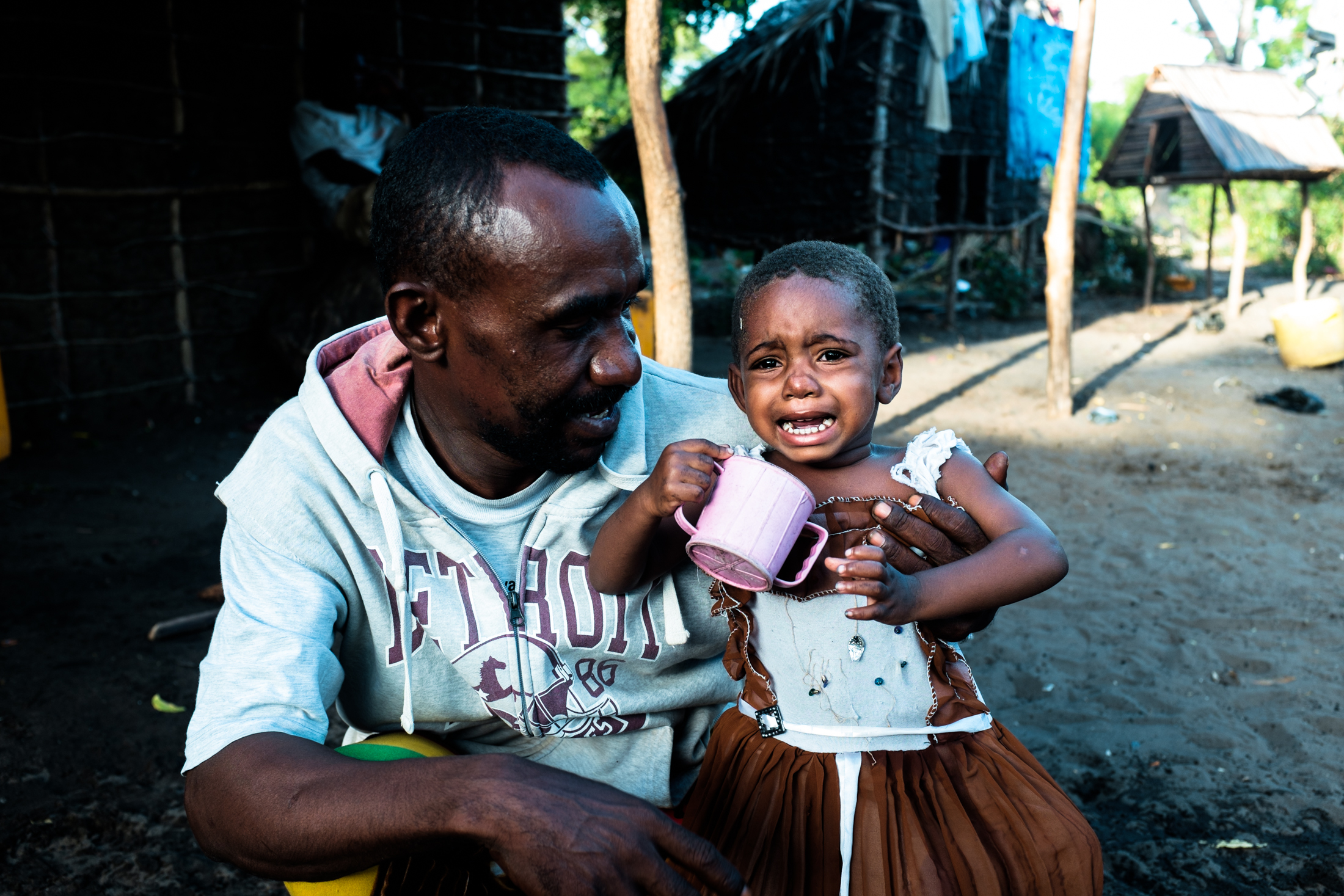 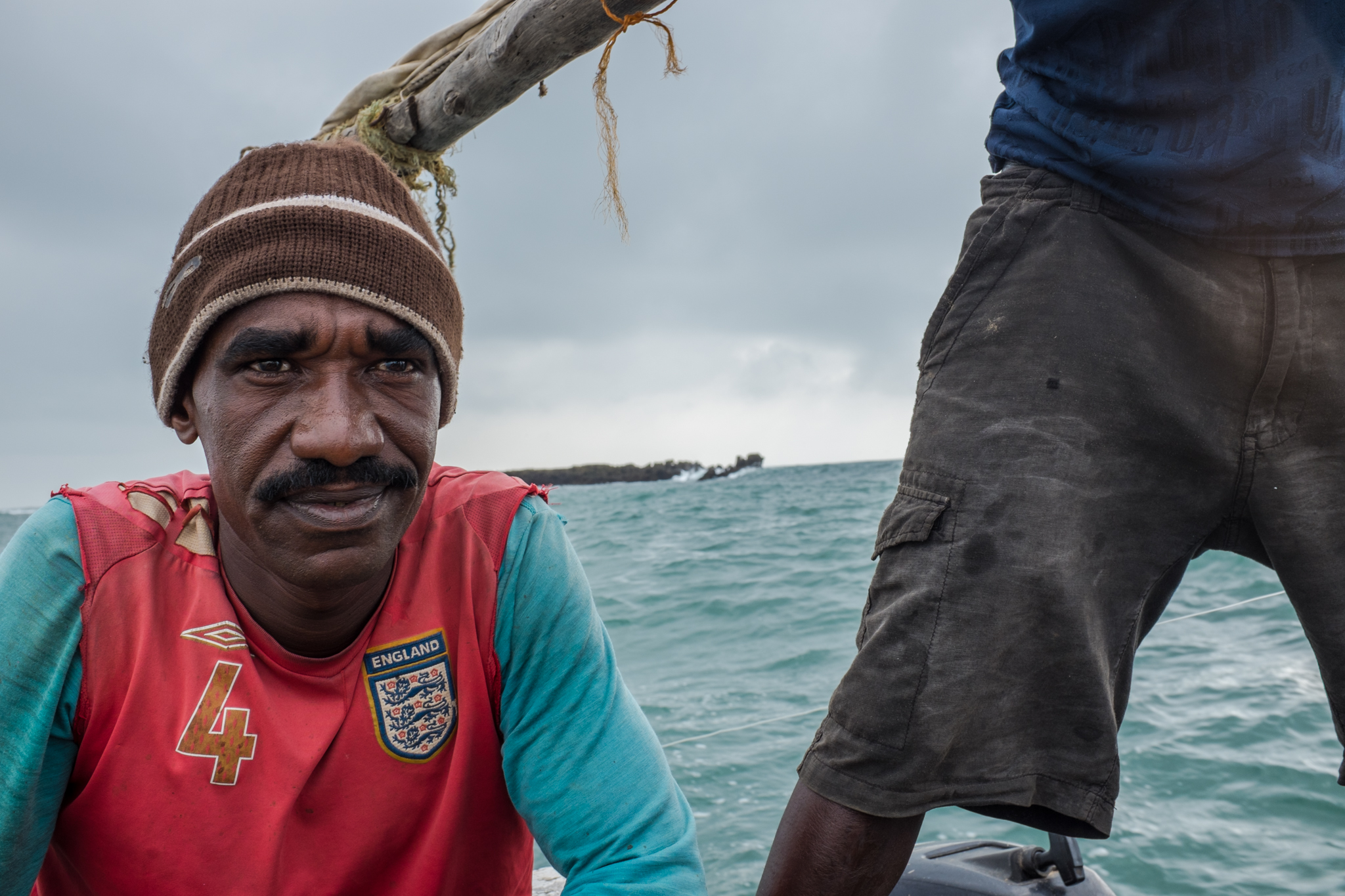 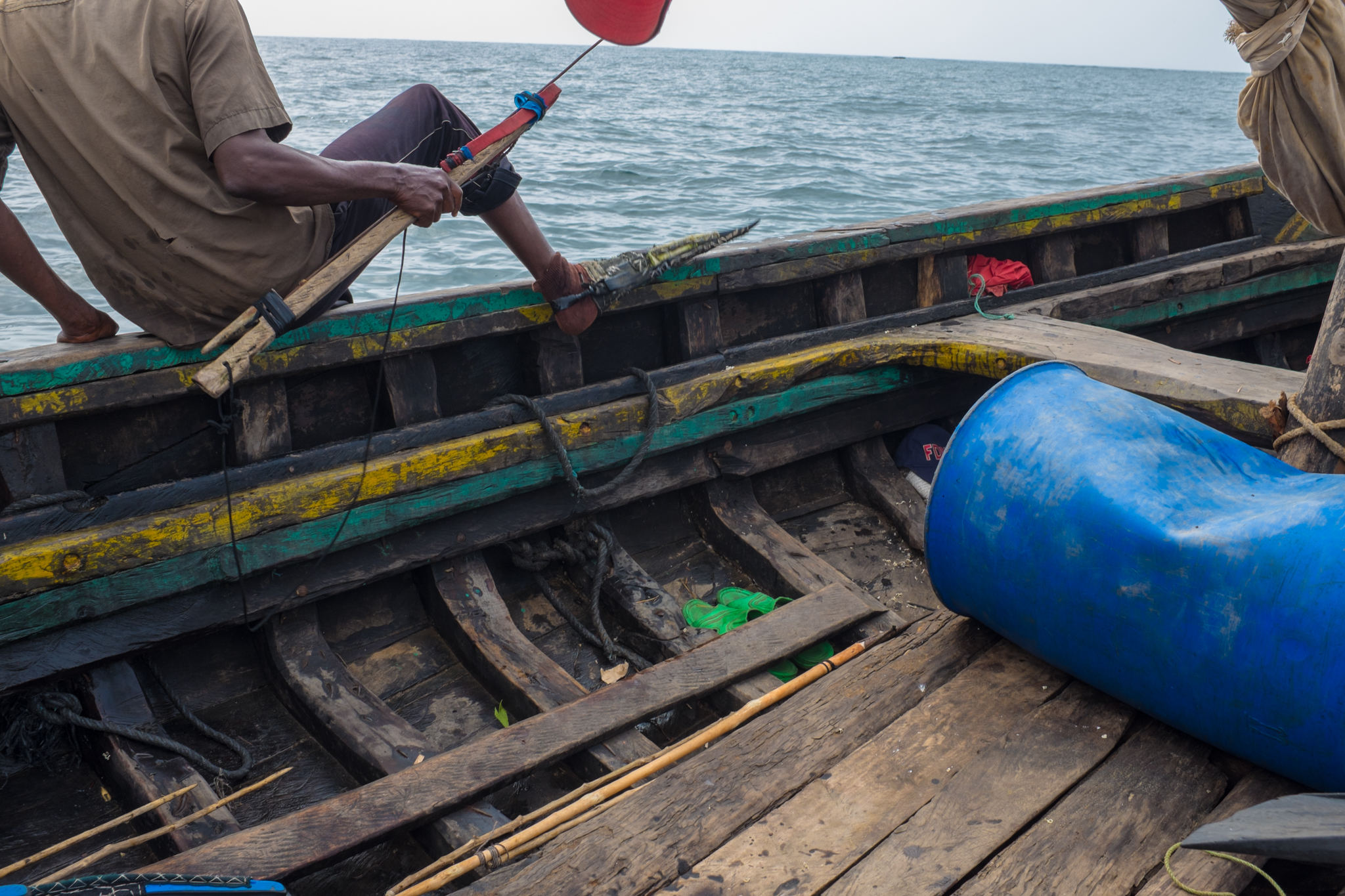 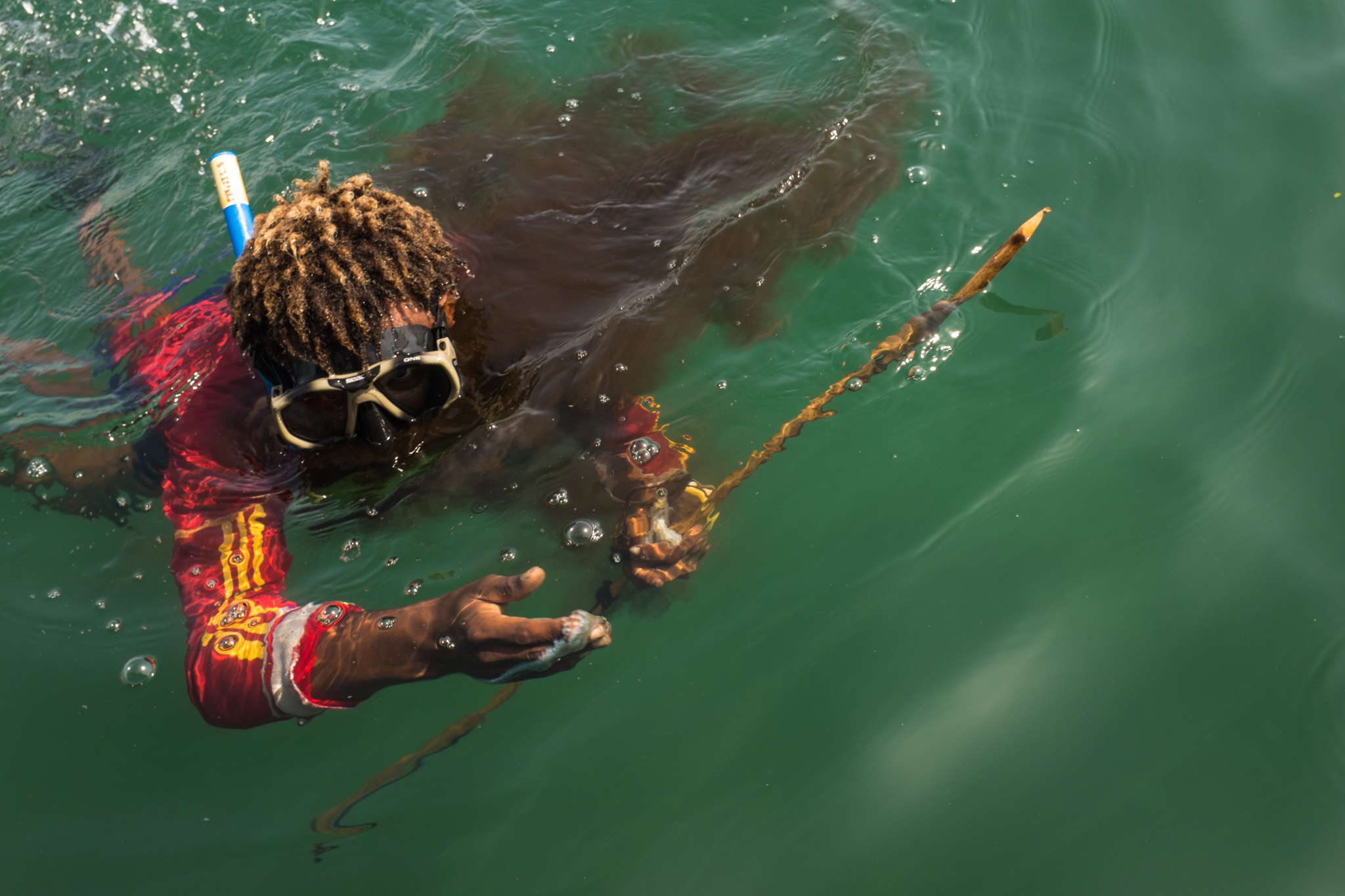 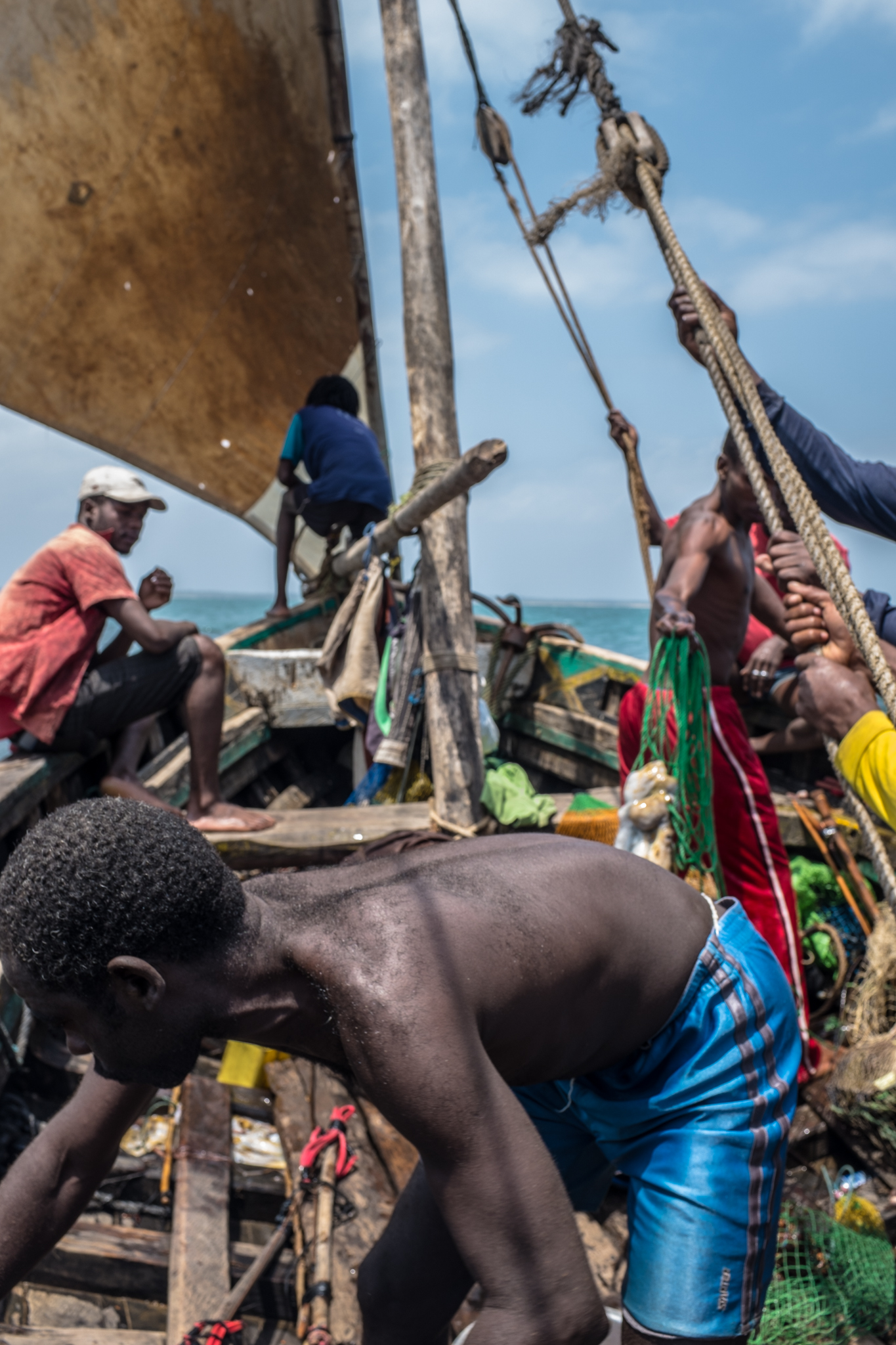 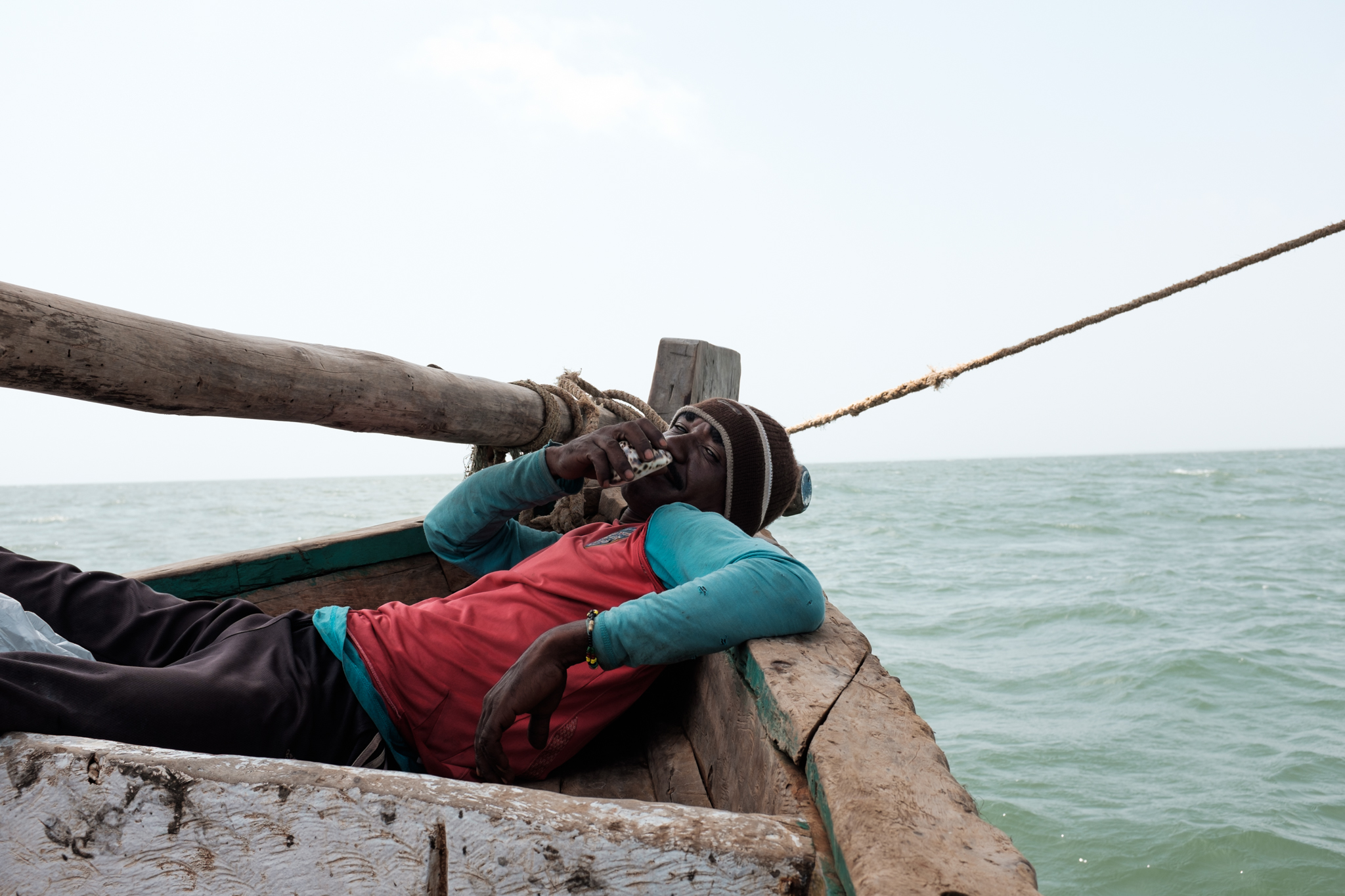 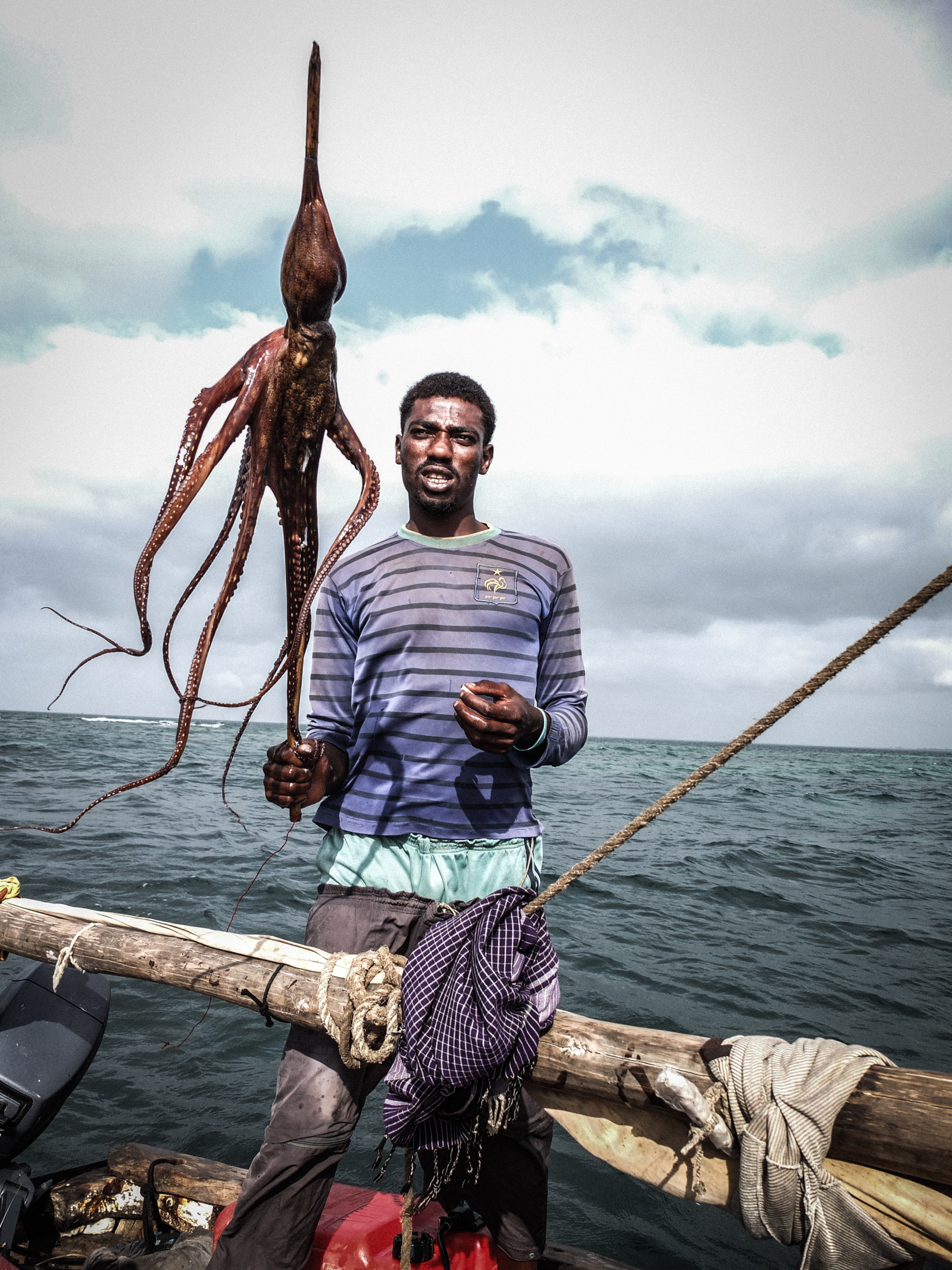 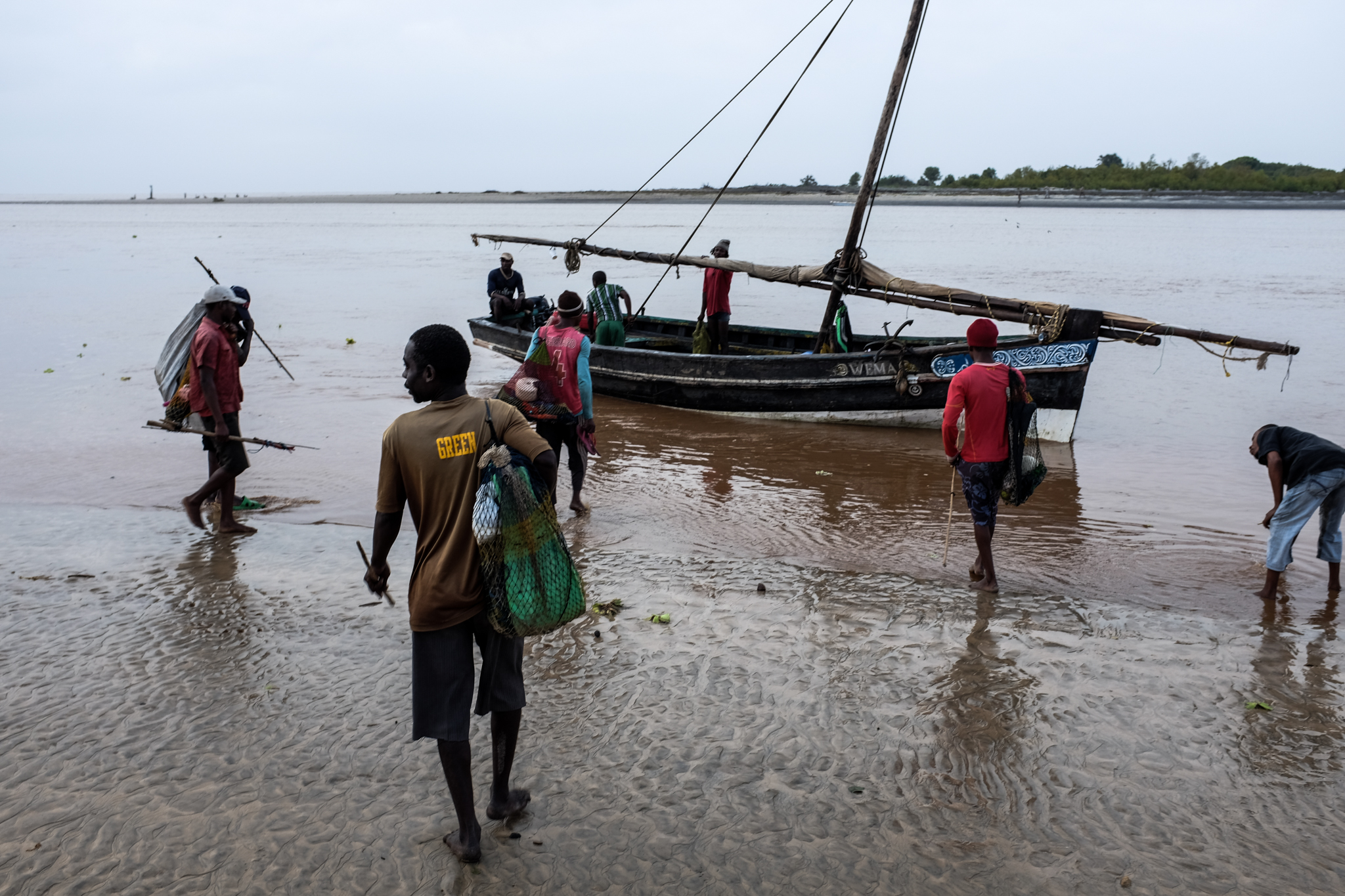 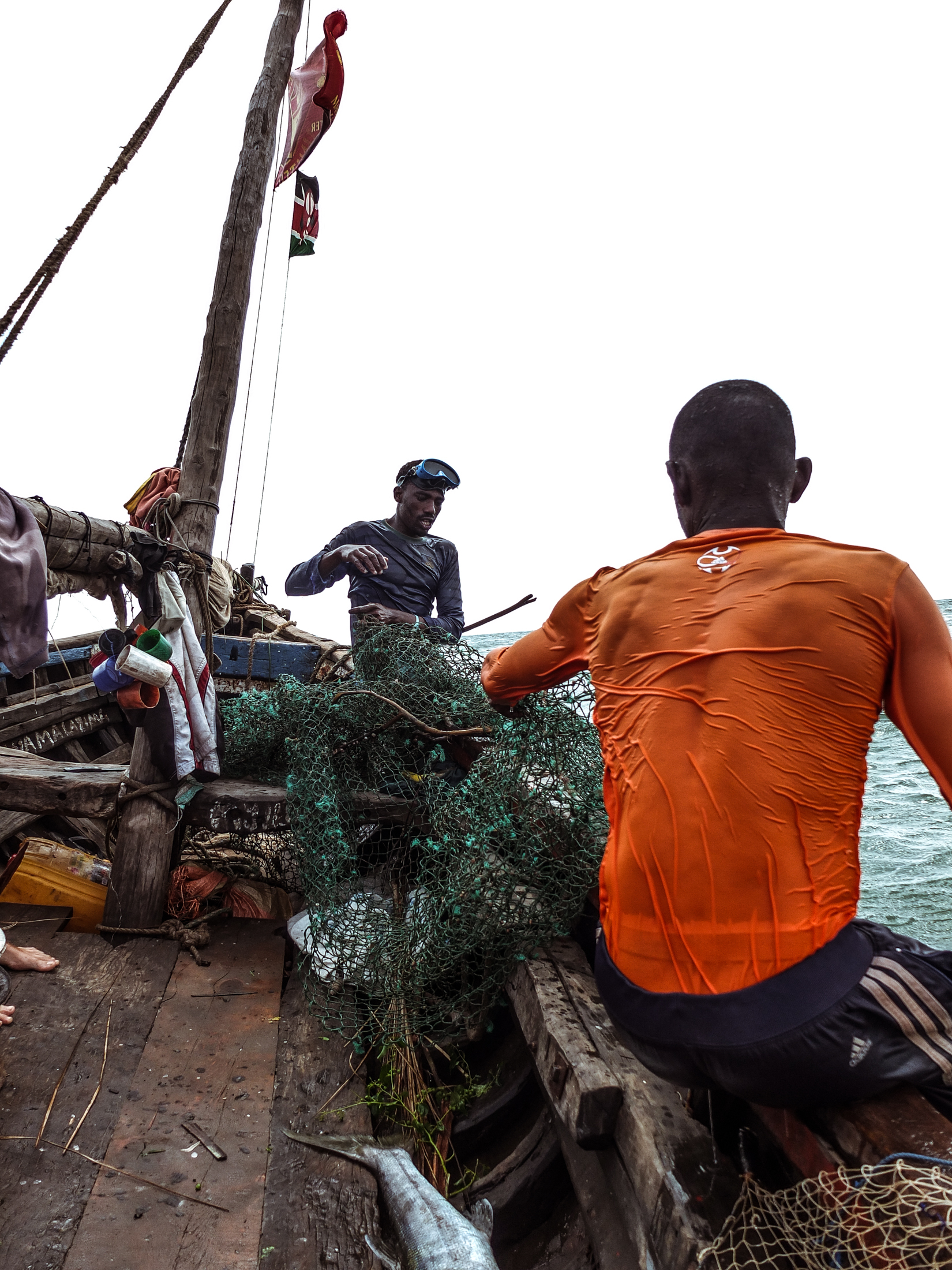 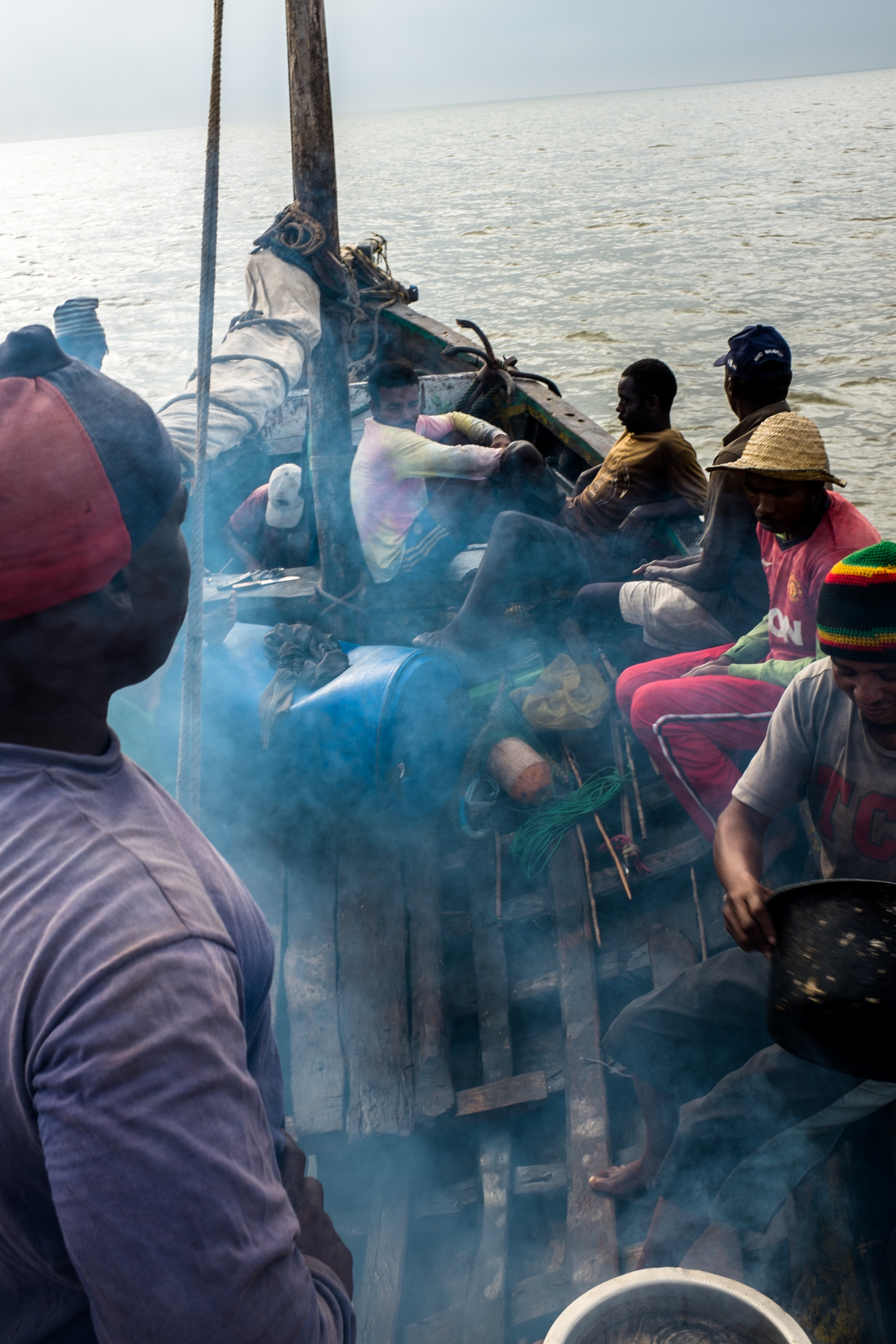 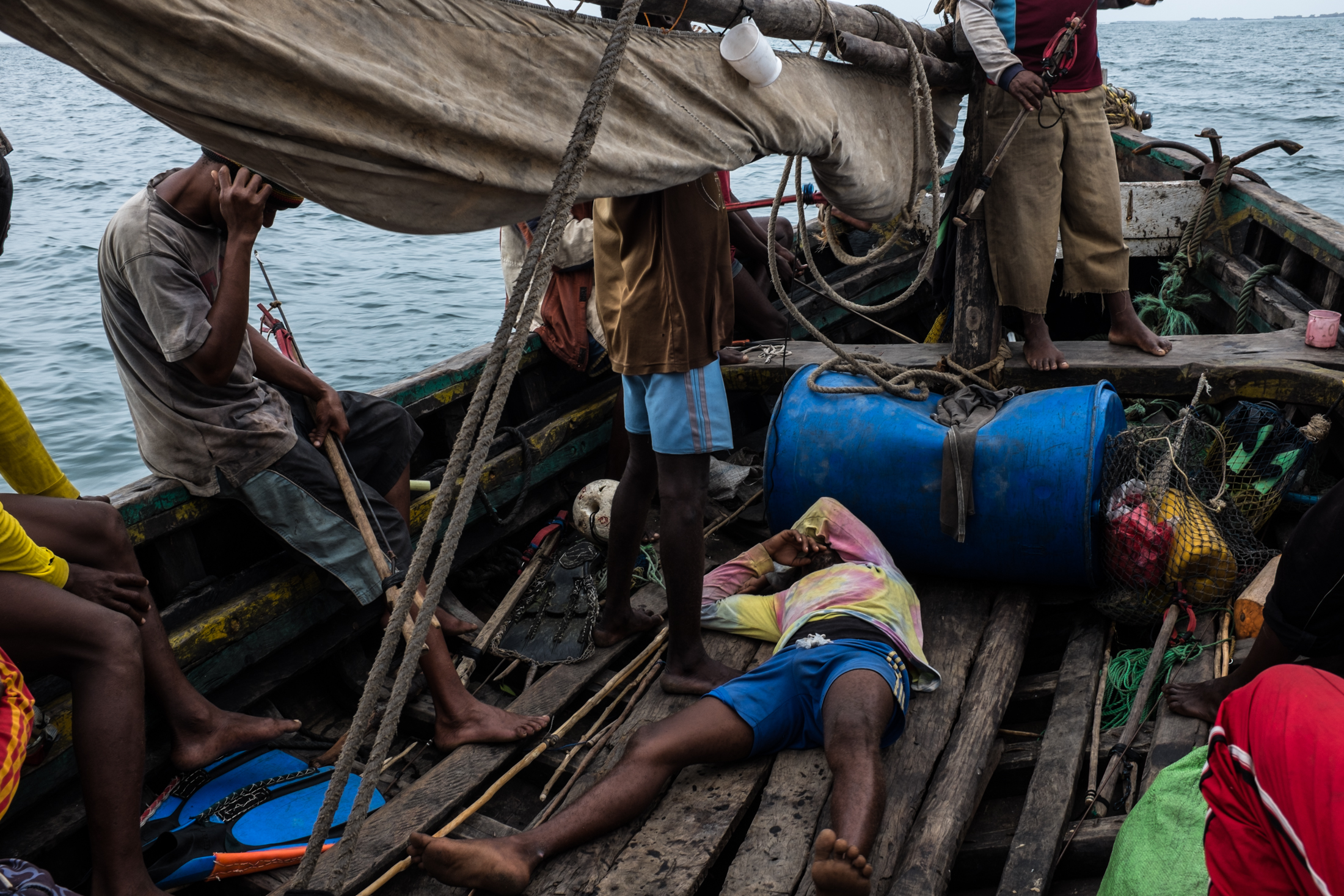 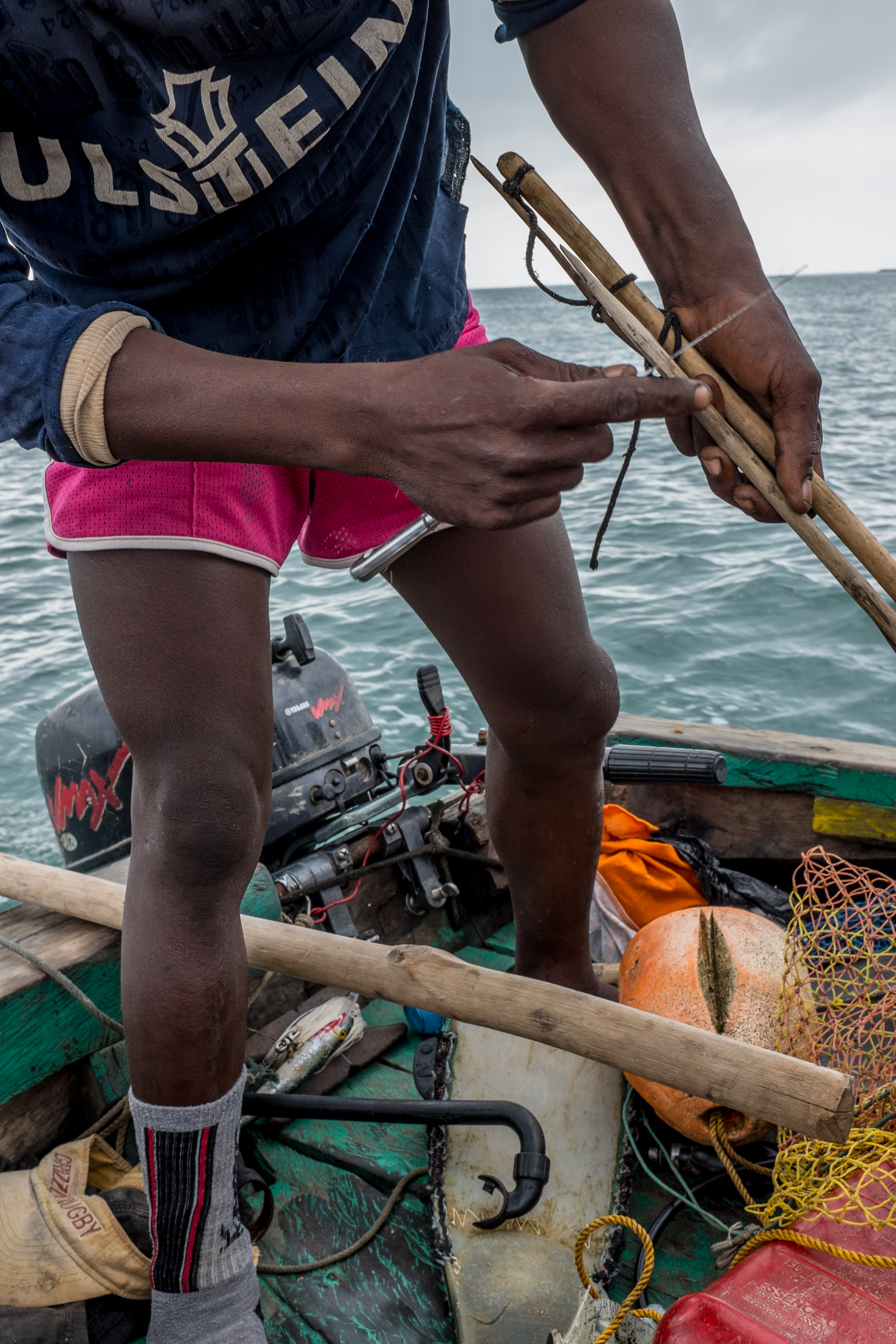 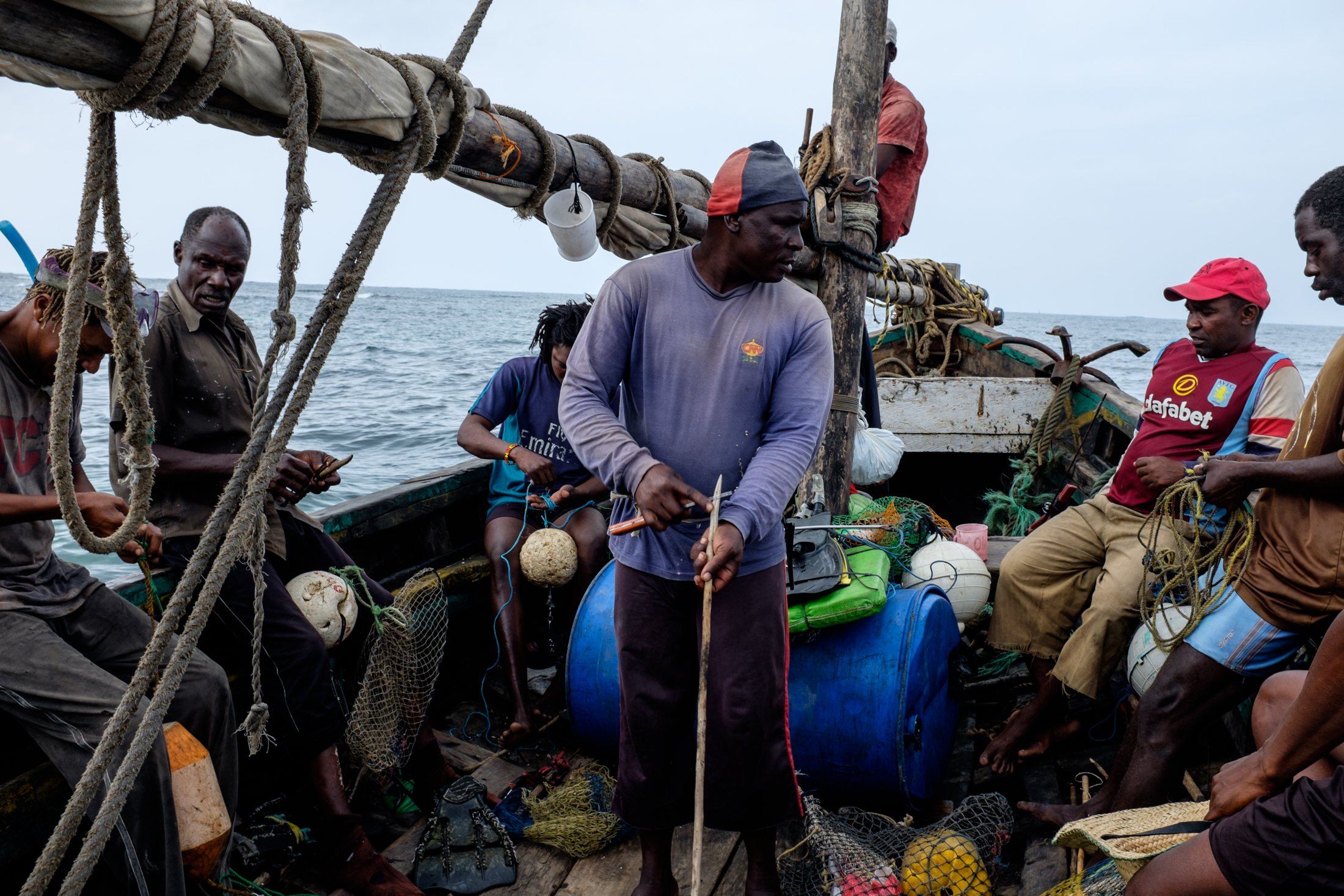 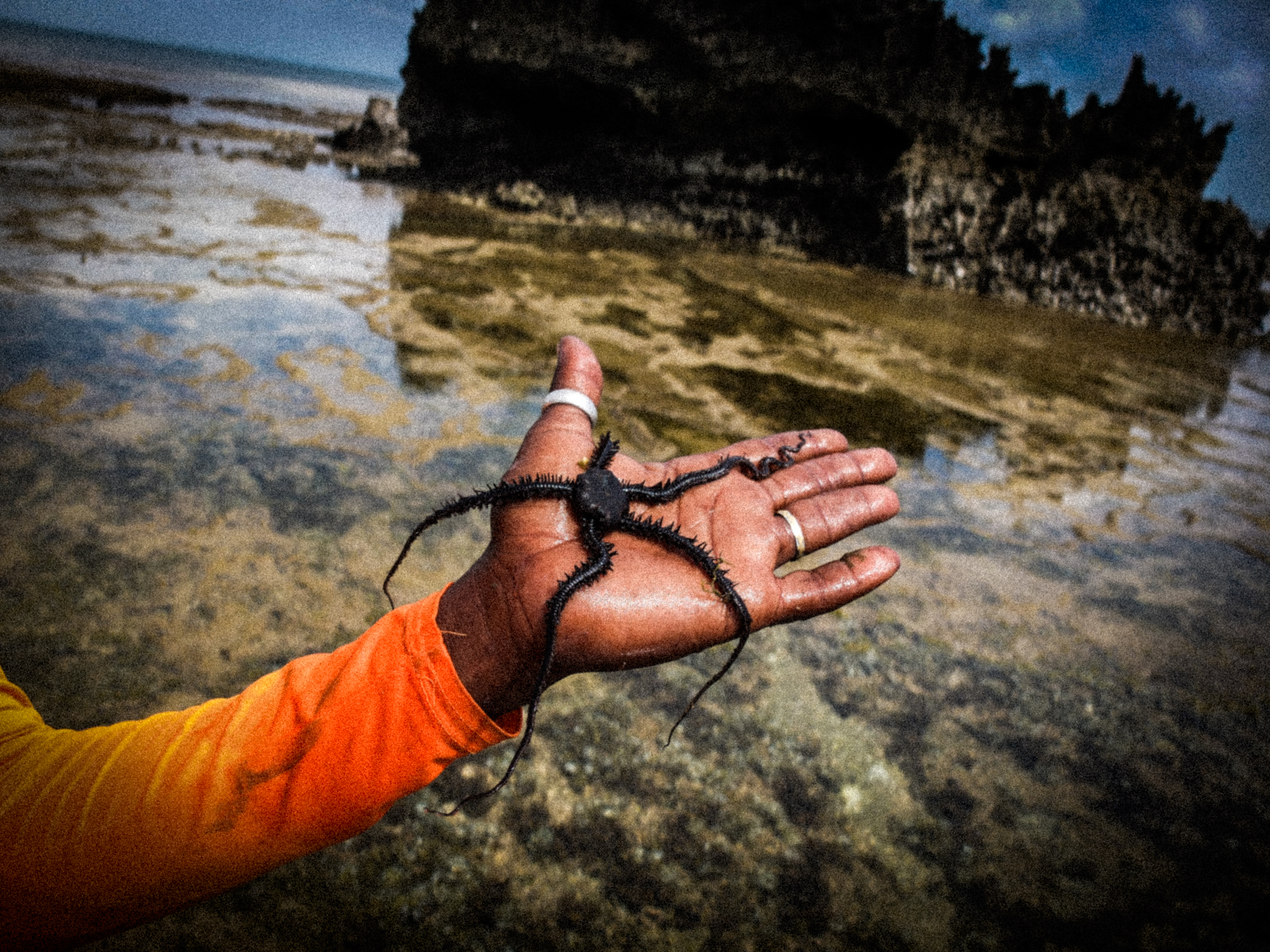 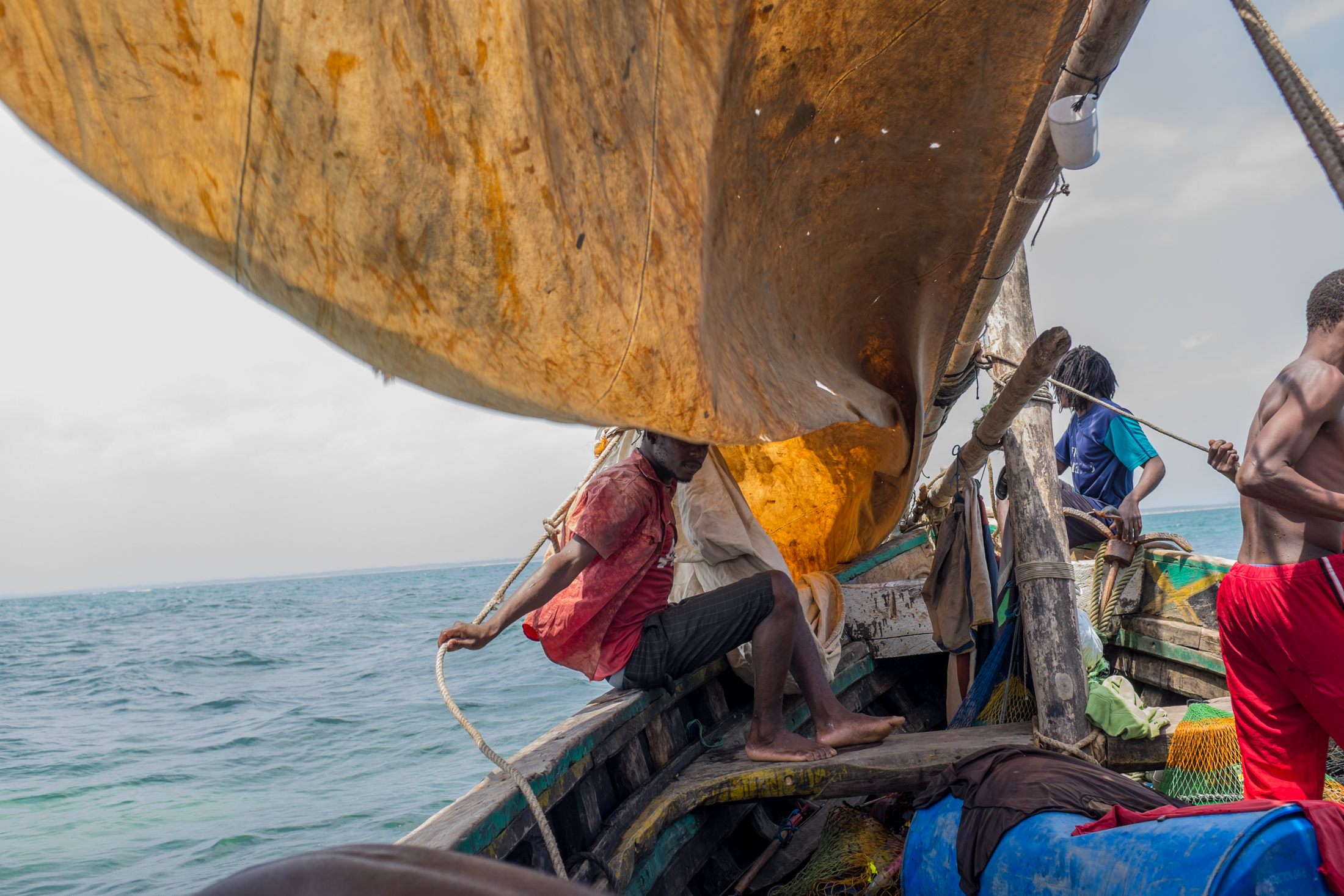 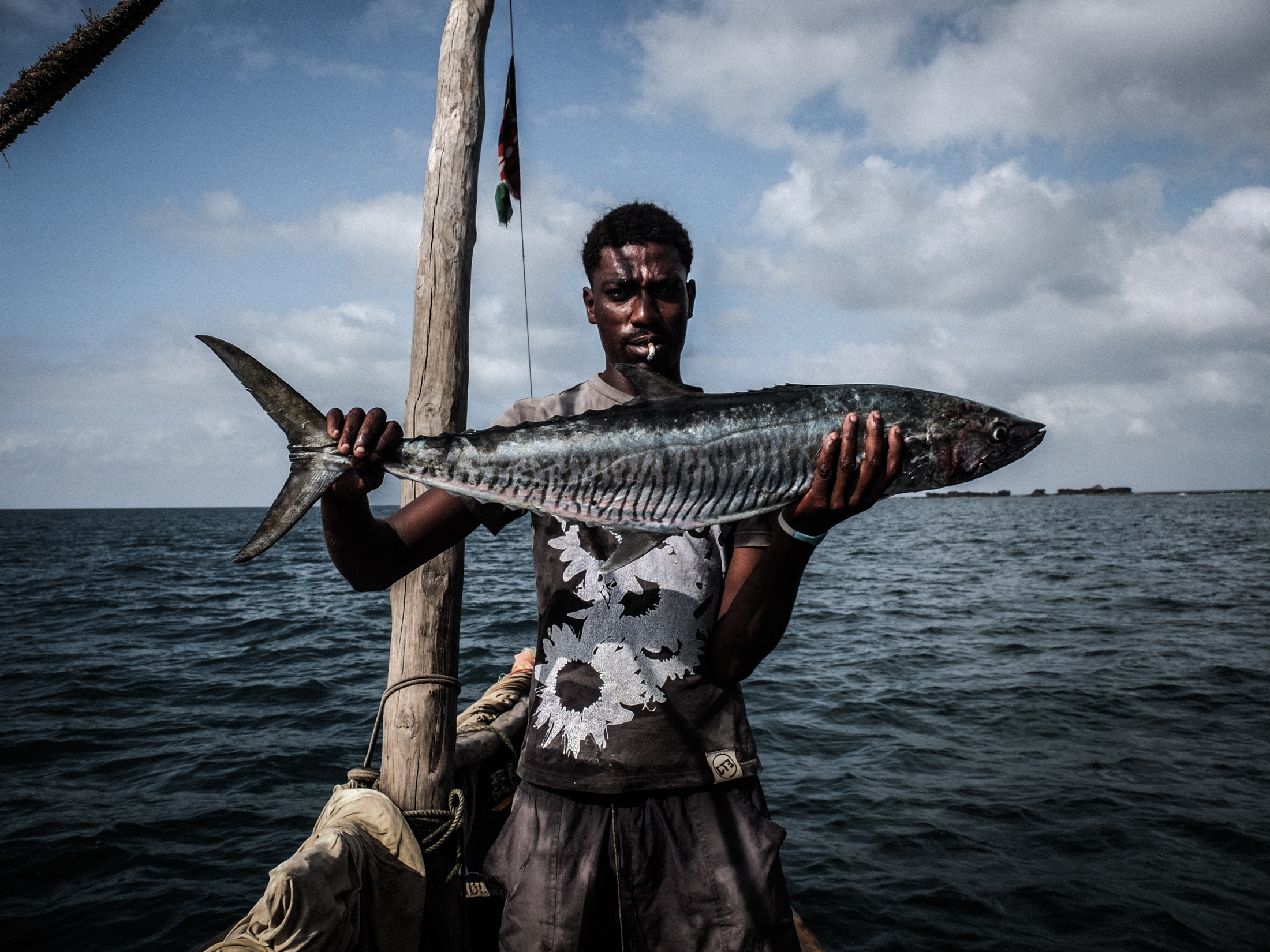 I heard my name yelled out. Looking in the direction of the voice I saw Captain Morzina. Last time we saw one another was a good two years ago, last time we went deep sea fishing. We walked up to one another and shook each other’s hands vigorously. Morzina put his arm around me, a feat for a man that much shorter than me, and began guiding my steps. I knew where we were going. He was pushing me towards the ‘bar’ — a hut under a big tree besides which fat mamas sell coconut wine. “When two men meet after a long time of no-see they deserve to have a drink together.” I did not question the captain. Alongside the road of ours we visited Morzina’s home, where he introduced me to his family and children. He asked me if I like his wife, and I said she looks alright. His baby daughter felt insecure next to me, though, she did not know whether to hide or stay and observe. It was already too late when she decided she was best off running, as her father caught her by the hand and asked me to take a family picture. The girl started screaming in a tone that must have shattered any windows if the village had any — it seemed there was nothing she wanted less than me taking a picture of her. Even though she was immobilized by the strong fatherly grip and could not run, she made sure her tears and nose did. I mumbled that a picture is not necessary, but Morzina insisted. He was my captain, after all.

We started drinking the white and sour mnazi, the local alcoholic brew extracted from coconut palms. The number of drunks in Kenya is easy to explain  —  after all, alcohol does grow on trees here.

So we drank into dusk. After a bottle or two, Morzina invited me to join his fishing crew the coming morning. I was excited to do that. It was what I came for. But in that moment Mawlidi was in my head: the celebration of the birthday anniversary of Mohammad — the Muslim Christmas. A procession of beautifully dressed people, dancing and playing, was passing the village of Kipini, on their way to a night of mighty mingling. The setting sun put me in a rush not to miss it. I abruptly stood up, sending a signal that it is time to go. Morzina would have preferred to stay for a few more bottles, but he did not want to be without company on a merry eve like that. So he followed me. On the way a policeman noticed us and strolled besides. He must have noticed that my skin was white, as he wanted to see my ID, which is mandatory to carry at all-times in Kenya, and which I happened not to have. But the cop did not wear a uniform, so when the man asked me for my identification, I asked him to show the good example by handing me some paperwork himself. As it turned out, they were in his uniform, in the office.

“So why are you trying to arrest me on your off-time? Go and enjoy Mawlidi,” I told the man.

“Give me 2000 dollars or you will have problems,” he retorted.

I took extra long steps to leave him behind, but he grabbed me by the wrist before I was too far. I freed my arm with a twist and a shake, and kept on walking. The policeman stayed in the dust behind. The Kenyan police is corrupt, yet easy-going. Morzina really liked the fact that I said no to a policeman, and that story was told to every next person that I was introduced to. Suddenly, we walked into a big crowd observing the caravan flowing by. The light was beautiful, and it lit the celebration well.

The night soon covered the day, but life did not retreat. Kipini stands tranquil most of the nights, so when an opportunity arises not to sleep, it is taken. The village hustled-and-bustled all night long, kids going to bed later than their parents. The mood was merry, and in that jolliness a cow was slaughtered. I did not taste it, as I did not stay up for long. I was hungry for sleep and to sail out into the waters with the rising sun. I slept outside, with a Maasai cloth wrapped around my face to fend off the mosquitoes. I was relieved when I felt the moist touch of dawn on my skin. I grabbed a bottle of water and walked to the beach in the Tana river’s delta, where the dhows lay, the cows drink and crocodiles wait for luck.

Morzina was already there, waiting for his crew to gather. I smiled at fishermen caught in surprise that a mzungu, a white man, is going fishing, too. Our yawning team slowly collected their equipment, slow enough for me to leave a big one by the bush, not to cause the crew any nuisance later on. We bade good luck to other fishermen, and hopped aboard Captain Morzina’s Wema.

In the beginning the fishermen were quite intrigued by me, and were asking the captain many questions about the mzungu in the boat. Then I told them in Swahili: “I have a name, you know. It’s Abdallah.” Everyone laughed. Soon enough the skin color was forgotten, and I was no longer a stranger.

Once we motored away from the mouth of the river into the Indian Ocean, we broke our fast. A pot of sweet sweet chai was boiled and drunk together with deep-fried mahamre and octopus. After breakfast the boat still had a way to go, so everyone resumed their personal business: sharpening of the wooden harpoons, fixing the gear, stitching clothes and precious napping, everyone preparing for the long dive ahead.

I sat in the stern, besides Captain Morzina who was steering the motor. Once the water turned from muddy brown to ocean-green, a fishing line with a lure in the end was cast, the other end of the line passing around Morzina’s little finger to get a good feel when a hungry fish goes for it.

“The water is green. It should be blue. Bad waters,” the Captain did not think fish were to be caught on a lure. But try he must. They were not going for fish, anyway. It was octopus they sought.

Slowly the divers put on their flippers and goggles, most of which had clearly been in use for a long time. All stitched and mended where the time had touched it, such gear would hardly be found in use outside Africa, but if the equipment was not as seaworthy, the men that wore it were.

One by one they plopped into the water and went under, into the kingdom of octopus and barracudas.

Soon enough Captain Morzina and I were the last ones remaining on the dhow. The anchor went out with yet another plop and so did Morzina. All that was left in the rocking boat was a fishing line, a hook, bits of octopus, and me.

So I too got to fishing.